In exercise and sports science achieving  “triple extension” has been the goal of many common athletic movements. Triple extension is a position in which the ankle, knee, and hip are extended. In studying the dynamics of the exercises involved in Crossfit programming, it is clear that there is revolution in the way that coaches and trainers are looking at movement. Most Crossfit exercise’s and workout’s emphasize what I would like to label as a global “quadruple” extension position. This mean’s extension at the foot/ankle, knee, hip and the thoracic spine. The inability to get to this position, results in suffering performance and pain. The following is a list of joints that I find are routinely restricted and prevent athlete’s from moving efficiently into this globally extended position. Keep in mind that dysfunction at one joint leads to dysfunction throughout the entire body.

1. Big Toe   How it negatively impacts global extension: Lack of extension in the big toe prevents our foot from creating an arch when our heel hits the ground. This is referred to as the windlass mechanism. As the heel strikes the ground during gait, our foot rolls into pronation. The contact of our toe with the ground  slows down pronation and pulls on the plantar fascia to form the arch of the foot. Lacking that ability to slow down pronation leads the athlete to overpronation. This overpronation forces a compensation from other joints to slow the knee as weight is transferred.

How this impacts an athlete’s performance: Many Crossfit workouts have exercises that involve transferring weight from one leg to the other (i.e. running, lunging, farmers walks, etc.) These exercises are example of locomotive movements that generally have the goal of going from point A to B. To be efficient an athlete wants to perform this movement with as straight of a line as possible. Think of traveling, you want to take the shortest direction to get to where you want to go. Taking the “scenic” route usually ends up costing your more in gas and time spent on the road. Running is no different and if our joints aren’t aligned then we waste energy. In a person that overpronates, their knee is pulled closer to the their midline. This means that they are needing to constantly compensate with other muscles to fight their knee from collapsing inwards. The end result is likely pain, but definitely a waste of calories using muscle improperly and an increase in fatigue to do so.

Common pain complaints: In a person that overpronates it is quite often that an athlete will often complain of plantar fasciitis, achilles tendiniitis and hip bursitis type symptoms.

2. Ankle   How it negatively impacts global extension: At the ankle if we find a talus bone that has shifted laterally then this is an indication that we are carrying more of our weight towards the mid-line of our body. The ankle accommodates this shift in weight distribution by turning the feet outwards. In doing so, the Achilles tendon gets twisted around a bit and movement becomes compensated. Dorsiflexion is lost and our brain will ask other muscles to pick up the slack, thus creating a compensation pattern.

How this impacts an athlete’s performance:  Most Crossfit exercises involve bending at the ankle, knee and hip to absorb impact from below (running, jumping, etc) or control forces from above (barbell squats,cleans,  etc)When the ankle doesnt bend well, then the knee and hip will try to make up the difference if possible. A restriction at the ankle joint will force the knee to travel forward and ask the quadriceps to carry the burden of slowing the knee down. This puts the glutes in a poor position to load up and limits the amount of force that can be produced. For athlete who is trying to explode out of the hole during a barbell squat, this is detrimental to force production. Our ability to create power from our gluteus maximus, hinges largely on our ability to extend our hips backwards as we descend into a squat. Lacking dorsiflexion pulls our knees and drags our hips with it.

Common pain complaints: An athlete who suffers from a lack of dorsiflexion will often complain of shin splints, knee pain and low back pain.

3. Hip  How it negatively impacts global extension: A lot of people don’t understand that the pelvis isn’t just one piece. Although, at first glance it may appear as one cylinder, it really is made up of four pieces; a right and left inominate, the sacrum and the pubis symphsis. With that being said, one hip should be able to flex while the other extends. One of the most common postural deviations that occur is an anterior pelvic tilt. An anterior pelvic tilt is when (one or both) inominate bones tilts forward. This position will lock the back of the pelvis in place and prevent it from extending the hip.

How this impacts an athlete’s performance: Without the proper ability to flex and extend at the hip, an athlete will be forced to compensate their movement’s when doing things like running. The hip is very dynamic and can do perform many different movements. Flexion of the hip comes with external rotation while extension of the hip is coupled with internal rotation. In a person that lacks the ability to extend do to an anterior pelvic tilt, they will also lack the ability to internal rotate well. This will drive the brain to find a compensation to move the leg forward and what usually happens it the leg must be swung forward from the side. As a result, the athlete will shift a lot when the run. Again, energy is wasted and performance suffers.

Common pain complaints: An athlete who has an anterior pelvic tilt will often complain of SI joint, QL, and knee pain. 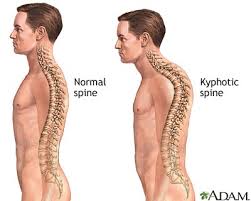 4. Thoracic spine   How it negatively impacts global extension:  Excessive Thoracic Kyphosis may have the biggest observable negative impact on global extension. Our scapula is attached to our rib cage. A rounded thoracic spine pushes the scapula up and forward. This closes down on the humerus and makes it impossible to get the arms overhead without manipulating the position of the spine without compensation. Excessive rounding also changes the position of the rib cage because it is normally accompanied by an excessive arch in the lower back.. In doing so, the ability to properly recruit the muscles of the of the trunk are inhibited.

How this impacts an athlete’s performance: Many Crossfit exercises are preformed in the sagittal plane. From the shoulder there are many exercises that involve flexion and extension of the shoulder. The shoulder is pretty dynamic and can move in out of multiple planes but really depends on the positioning of the scapula to do it efficiently. When the scapula is too high, to get you arms over your head you will need to compensate by arching at your lower back. Again, this is an example of an energy leak, in which the goal is to get weight overhead but to do so the entire spine must be deviated. The more kyphotic a person is, the more the more lordotic the lumbar spine usually will be. In addition, when a person has an excessive curve in their thoracic vertebrae they will also lose rotational mobility. Considering how much rotational power is needed for running and rope climbing, this spells doom for Crossfitters looking to crush multi-modal PR’s.

Common pain complaints: An athlete who has an excessive thoracic curve will often complain of shoulder impingement, tennis elbow, and mid-back pains.

5. Neck  How it negatively impacts global extension: A forward head carriage is the most common postural deviation seen at the head and neck. The head weighs 8 to 11 pounds. We need to remember that the spine is one piece. If the neck is out position the rest of the body either follows it or is taxed excessively to hold it in place. One of the muscles over-worked by a forward head carriage is the levator scapula. A short and overactive levator will pull up and forward on the scapula and make movement of the shoulder dysfunctional.

How this impacts an athlete’s performance: The sport of Crossfit is incredibly dynamic and requires explosiveness, coordination, flexibility and stamina. Of the skills that is often over-looked is the importance of maintaining a center of mass. Having a forward carriage displaces this center of mass  to a forward position. Almost as if a person is constantly falling, the athlete’s brain will need recruit additional muscle to maintain alignment and good positioning. This is counter-productive for an athlete that is trying to be faster, stronger and go longer because muscle gets trained to do a job. A muscle that is easily stimulated can be recruited when it is not needed. This is the concept of synergistic dominance and reciprocal inhibition. Poor alignment for an athlete, leads to muscle imbalances and movement impairments.  A forward head carriage is an example of this. If we go back to our functional anatomy we need to remember that the levator scapula muscle attaches from the base of the skull to the top of the scapula. A forward head carriage, will shorten the levator scapula and the upper trapezius. Proper shoulder function and rib cage positioning will be very difficult to achieve because the lower trapezius will be inhibited and the scapula will be very hard to depress.